It’s somewhere around 7am-ish. I’ve already been up since around 4.30 after a good night’s sleep, albeit it was too warm. I’ve been chugging down plenty of water, with electrolyte to prevent dilution of my body’s minerals, to fully rehydrate before the off.

We’re gathered by the Bhuddist temple gate: backs are slapped, hands are shaked, words of luck exchanged. A line of monks stand in front of us while Race Director Stefan gives final instructions before inviting the monks to give their blessing to us all, wishing a good race.

The deep, toning chants reverberate through our chests and our pulses quicken. Beads of sweat prickle our skin. The sun is getting hotter by the minute, as is the brightness of the morning. Eyes squint; sunglasses come out.

Today sees 19.1 miles/30.6 km of running. A doddle, a jog in the park . . . back in the cool dampness of the UK. Here? The distance is the same and will be pretty much flat the entire way, but the temperature will climb and start to bake our already overheating bodies. We will struggle to keep cool. And then that distance won’t seem so much of a doddle after all.

We force out of our minds the total distance we shall cover of around 140 miles/220 km in the following six days: it’s best to chew the elephant one bite at a time. And with that thought, we’re off!

Course marker Manu (ultra-runner himself and Race Director of the Burgos Ultra Stage Race) had at the previous night’s briefing warned that portions of the course were waterlogged after recent heavy downpours. We were soon off-road and meandering around a muddy track, having to leap across a couple of water holes before returning to the start area and then off into the Cambodian interior.

An interior that hasn’t changed for decades, in places for over a hundred years. Hard-packed tracks serve as main roads through tiny villages, some consisting of not more than a few homes. Only the infrequent ‘rich’ homes or political offices might have plastered brick walls marking off sturdily-built properties. The vast majority of small wooden huts housing large families are suspended off the ground, marked out by rickety wooden fences (if at all). You soon get used to their small yapping dogs bolting to see who you are: while harmless (they soon bolt back if you give them a bark of your own), the brave ones can give a fright if they get too close.

But what’s more recent (I suspect: I can’t see this having happened often between the 1970s and 1990s) is that other Cambodian hallmark: tons of laughing kids. They’re everywhere. That’s something else you soon get used to: the calls of “Hello! Bye-bye!”

While after a few days of replying every few minutes “Hello! Bye-bye!” in response gets a bit tiring, a lesson I learnt from the previous year is don’t just simply raise a hand in response and grunt incomprehensively.

Unless you’re immune to the guilty feeling of seeing a child run off to his or her Mum distraught and in tears because you were too knackered to reply “Hello! Bye-bye!”

Checkpoint 1 came and went, all the runners greeted by a tunnel of cheering kids with outstretched hands. If there’s anything guaranteed to raise the mood of a bunch of runners after a hot first 6.5 miles/10 km and thoughts of “What have I done entering this?!?”, then it has to be the infectious laughing and cheering of Cambodia’s kids, with us throughout the race!

By 10am it was roasting and time to start chucking down cans of Coca-Colas and ice-cold waters from any street stall that sold them. Pacing wise I was feeling pretty good, which was a boost: my heart rate was behaving and if it started rising too high then I simply backed off a while until it recovered. Inevitably this meant a mix of running at a steady pace and a fast march.

Sure enough the distance was just eaten away, one step at a time. The time whizzed by and I started to recognise the long, dusty track that would descend slightly and eventually reach the finish line of Stage 1. The cheery, unflappable Meese (Belgian race volunteer, medic, ultra-runner extraordinaire) checked me in and that was one-sixth of the race finished. 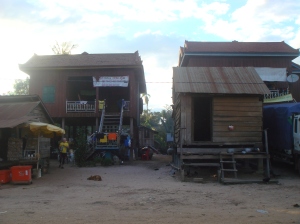 Stage 1 is a great, gentle introduction to the Ancient Khmer Path stage race: nice and flat, starting early to allow a gradual introduction to the heat, and a distance that gives an early finish for the day. Plenty of time to stretch off and self-massage some niggles, and simply to doze a short while. It’s also a great Stage 1 camp: we would all be housed in a few large rooms of the homes of local villagers. We were now in the Cambodian countryside many visitors don’t get to see.

It’s quite something: to give over the largest rooms of your home to a bunch of already-stinking runners and the Global Limit’s entourage. With a plentiful supply of cold drinks to buy from the family’s little shop there’s also a couple of very large water barrels with some pails to pour the cold, clean water over sweaty bodies and clothes. Make the most of it, I thought.

And TV. Though none of it was understandable and, confusingly, it seemed to keep changing every few minutes. 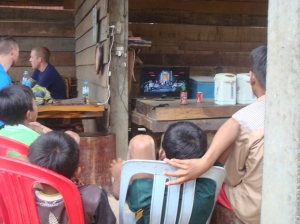 We were all gathered around the large tables the family had put outside so we could prepare our freeze-dried meals together, chat and swap notes about the stage. The source of the confusing TV then became clear: Big Brother, Medium Brother and Little Brother had reached an entente cordiale over the battle for the TV remote control. By swapping the remote control between each other for about 5 minutes a time Big Brother got to watch an action movie; 5 minutes later the remote in Medium Brother’s hands changed the TV so he could watch the adverts (?), and then Little Brother 5 minutes later switched to watch some cartoons.

Well, it seemed to work very well and there wasn’t a single argument or crossed word.

Didn’t get to find out what happened at the end of the action movie though.

The late afternoon and then darkness approached. With it was the need to get inside our mosquito nets to sleep in a very warm room in the family’s wooden house. As the humidity climbed, so did the sweat rate . . . there was no escaping this! I breathed as slowly as I could, staying perfectly still. The sweat was rolling off me. Eventually, and with the aid of half a herbal sleeping tablet, I drifted off . . .